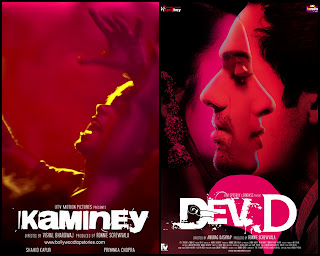 Its the thing about rain. It makes me want to listen to Colonial Cousins instead of Black Sabbath and play the guitar instead of gossip around. Yep. It gives me time for myself. And that is precisely why I'm back to blogging after ages. All these days, I start off something and then save it for sometime later. But right now, the blogger in me is yelling for my time and all I can do is say yes.

Alright, now to start off. I thought I should also join the bandwagon of people talking about unarguably the two greatest Bollywood films of this year, Dev D and Kaminey. Till ten days ago, everyone thought Dev D was the film of the year. And now suddenly two parties have split up arguing about the topic over and over again. Before I give you my point of view, I'll tell you what I think about the two movies, individually.

Dev D is the amalgamation of two people's passion for the art of cinema, Anurag Kashyap and Amit Trivedi(Yeah! Dev D is not really a lot about Abhay Deol contrary to popular belief.). Having watched Black Friday and Satya(probably among the finest of Hindi cinema), I knew Anurag Kashyap was upto something big with Dev D. I mean why would a director of his calibre retell the story of the eternal love lost guy, which has been already told so many times. But voila! did he take everyone off guard. I mean right from the titles to the last shot, the same old story could not have been told so differently. A very novel experience of film watching. But Dev D wouldn't have been the same but for Amit Trivedi's 'Musical Attyachar'. Kashyap himself admits that but for Amit, Dev D wouldn't have been the musical it is. 18 mind-blowing songs. 18, for God's sakes, pieces of genius. What makes Dev D so compelling a movie to watch is the sheer depth of it. After walking out of the theatre, I was so hungover that anyone might have thought that it was me and not Dev was so heavily drunk. Dev for the first time, was portrayed not as a pitiable lover but a coward who refused to wake up. Another thing which deeply rooted the film was the honesty and maturity with which Anurag told the story. He actually knew what drunkards, pimps and prostitues were like. He saw it all in reality. And the way he handled Chanda's character with no taboo was so very courageous. Dev D is more an art piece than a movie and it will go down as one of the finest of Hindi cinema. The triumph of a director and his crew who weren't scared to try something new and triumphed in it.

Now, to Kaminey. One man army, Writer-Musician-Director-Visionary Vishal Bharadwaj hits back Bollywood Quentin Tarantino style. To be honest, I've never seen a Tarantino film but Kaminey supposedly resembles a lot of his work. Kaminey is so much like an indie Hollywood movie that after stepping out I thought I had just watched an English movie. One thing about Kaminey is that it is extremely intelligent for a typical Indian commercial cinema. I'm really surprised to hear that this was supposed to be an out and out commercial film. The plot is so Javed-Salim like with identical twins, corrupt cops and shaggy gangsters. But what is so refreshing about this film is the brilliant screenplay which keeps you at the edge of your seat and the minimal, sharp dialogue which leaves you breathless. Probably for the first time in Bollywood that a film has had such extremely talented ensemble cast and all of them have done more than their part. Shahid Kapoor proves to the world what it means to be Pankaj Kapoor's son and does a fabulous job playing the identical twins. Balancing the innocence and honesty of Guddu with shrewdness and brutality of Charlie was no mean task but Shahid does it with panache. Priyanka Chopra, the actor, was born in Fashion and got matured in Kaminey. Everyone in the cast does a brilliant job but Amole Gupte is a revelation. The laziness with which he utters his dialogues is, for any actor, loathsome. And with some very good songs, 'Dhan Te Nan' Kaminey is rocking the charts. Kaminey is the typical Bollywood 'formula film' which is also so acclaimed because Vishal Bharadwaj presents the same old story in a new light.

Now, when the two films are compared, what is strikingly common between them is that both of them are essentially old stories but the method in which they have been told is very unconventional. And both of them are directed by probably Bollywood's finest directors who make films for the heck of it. That's it, the similarities end there.

if I were to choose one film out of them both, I would choose Dev D. Which is the better film, I do not know. But which I loved watching more, surely Dev D. The difference between both the films is that even if Kaminey is high on adrenaline and suspense and you want more of it, you will leave everything behind once the end titles roll. But in the case of Dev D, it took me more than 3 days to get out of the hangover. Kaminey is more about your head. It pumps it, ticks it and takes it on a roller coaster ride. Dev D is about the heart. It makes the heart, at first heavy and then incredibly free and light.

Finally, Kaminey is about skill but Dev D is about genius.
Posted by sirish aditya

captian...i think ..its d other way around...kaminey is abt genius..a grp of hippies acting fr a heck of cinema..vishal jindabad and amol gupte (arey yaar eh toh acting bhi karletha heh) once again bak wid a blast after touching evry ones heart wid TJP and amole is not only a revelation he has got a disatrous posture on screen...JAI MAHARASTRA

hmm i really found kaminey a serious one time watch..i couldnt bear to think if i could watch another time

ahm! i thought watching kaminey the second time was better..enjoyed it more..