yet another abandoned undertaking

Wrote this post sometime in the first week of March. I don't know what I was going to say and I think I abandoned it midway because it wasn't gelling into a unified whole; I'm posting this now because the part about celebrating the normal life has been with me for a few years and I think it finally semi-concretised into an explicable feeling.

As usual, Grant Snider does a much better, more beautiful job of conveying my feelings 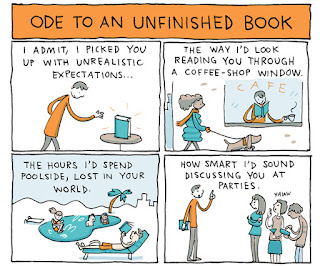 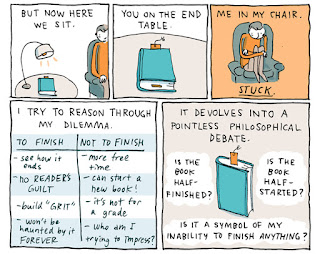 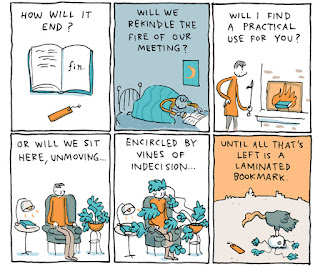 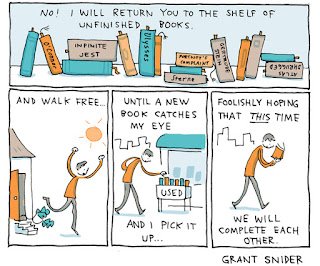 We watched Lady Bird in a theatre today. It's been such a long while since I watched a film without worrying too much about the pros and cons of having to go to a theatre to watch it. Sravani really liked the trailer but I went because I have a soft corner for films like Frances Ha and The Squid and the Whale. The film reminded me of Juno and Boyhood. I enjoyed watching it for its warm fuzziness and essential good-naturedness. On thinking of it, I think it is also similar to Little Miss Sunshine though that film had exquisite dialogue.

Lady Bird is the coming-of-age dramedy of a high school girl in the US around 2002. The details are slightly new but all this has been done before. If anything, films like these make me nostalgic for films like these. And what exactly do I mean by "these" films? They're about normal people, doing normal shit, feeling normal desires and frustrations, wanting stuff you and I'd want in their place, their worlds small and complete. All they want are the things that they see others having, all purpose in their life is defined by the rituals their society has put into place. They have big-hearts but small minds. Even their imaginations are not free enough for them to seek the transcendental. These are petty people. These are people like you and I.

Not long ago, nobody wanted to see these stories. We wanted our heroes to be grand and greater than life. We wanted their journeys to be special that it warranted a narrative about them. Then something strange happened. With the rise of modernism, everyone could write their own stories and put them out. The individual with all his mundane, everyday experiences and micro-epiphanies was the star of his own life and it gave others the license to feel important living the normal lives they did. I also think that with the rise of handycams and their excessive usage to record individual milestones, especially in the US, for the first time celebrating a birthday, or going to the prom, or graduating high school became dramatic events in their own right. Their children then wanted to do all these things, and record them, because as far as they could see, it was the rite of passage to adulthood. So we started deifying the normal individual doing normal things and calling him the hero of the modern world.

A hero once had to do impossible feats to earn a mention in a bard's epics. Now all he/she had to do was toe the line a little out of conformity and he could earn a film of his own. I don't have concrete proof of this idea, and I'm not sure I have the motivation and perseverance to go seek it, but if it's important to me, I'll be forced to learn it sooner or later.

Pop culture has a huge impact on how a generation grows up and learns to measure itself upto. Because of films that have protagonists who are narcissistic, self-obsessed, and filmmakers who make their spiritual quest the only primary motivational arc, we probably live in a society that's so individual-centric. Again, art reflects all changes happening in the society too and so industrial age and enlightenment thinking are more deeper factors for us being in a position like this today. Ofcourse, its not all bad and there are upsides, primarily the fact that we are the most accepting and understanding of generations, but when a human becomes the most atomic and intelligent entity in societal structures, then the burden of existence eventually stops at his doorstep.

I watched Three Billboards outside Ebbing, Missouri yesterday. It was good but no match to In Bruges or even to Seven Psychopaths. I know all films are different beasts and should be judged according to their own merits and flaws, but I want to embrace my inner Dionysis for a while after spending too much time with Apollo. Tim Parks' take on Three Billboards raised an interesting thought. We claim to want our films to be realistic, to deal with real people but we don't really. Not just because reality is a way too complex to be portrayed conclusively in any art but also because the reality we see is the image we project on the real reality. No filmmaker or writer, worth his salt anyway, can betray the way he sees the world. So when a filmmaker presents a film, watch it with the understanding that this is the way he wishes the world is. If you like it, good for you. If you don't, well you have a reason now to create art and impose your view of the world onto someone else.
Posted by sirish aditya

Labels: nothing much really