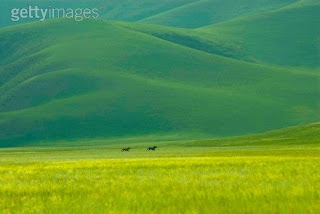 Behold! What better than the sight of an unconquered stallion, with its mane flowing, running in the open grasslands with the sun shining on its bare body and wind trying to keep up with it. I named this piece Seabiscuit for the lack of a better idea. Because it was Seabiscuit who inspired me to know more about horses and taught me that freedom of the self is the most important virtue in the world. And now, I breathe in. I read the book about a fortnight ago and loved it so much that I finished it in about 2 days. I hadn't seen the film, had no clue what the story would be but then thanks to Laura Hillenbrand, now I'm love with horses. I saw the film today and I'm forced to write this. To the running spirit in all horses.

"Its not about what you were born as, but what you have it in you to be." I've heard various versions of this line a lot of times. But not until I read the book did I realise its essence. Wait a sec, Before I talk about this, I'll tell you something about him. Seabiscuit is considered the greatest racing horse in the history of mankind. During the Great Depression era, he gave all the Americans a hope that no matter how worse things look, there's always a chance to get the better of it. Born to one of the greatest racehorses of all time, Man O' War, who supposedly looked royal, huge and almost perfect, Seabiscuit looked nothing like him. He was small, lazy and walked like a cripple. But then, there's this beautiful scene in the movie when his trainer says to his jockey, "They screwed him up so much that he's forgotten that he's a horse. Remind him why he's born for. Make him Run free." Its about the spirit that could not be broken. I don't know why I can't write anything. Its just that I'm on a high.

I think I'm a romanticist. I tend to go over the top. I glorify things because I know only when someone has the courage to dream the impossible, does he have the will to stand up to it. I just made that up. There's so much I want to express but I cannot. I mean look at Tom Smith. He doesn't need no fame, no money, nothing at all. Give him horses and he'd be content talking to them forever. At one time he says about an injured horse, "You don't throw away your life just 'cause it's banged up a little bit." That's the kind of love I'm talking about. To find out what you are born to do and go against all odds to achieve it. The most I love about Seabiscuit is that mad streak in him. He does something only because he wants to. Not because he's supposed to, not because he's forced to. And that is why everytime he looks another horse in the eye, he challenges himself to beat him. Because Seabiscuit doesn't know what he cannot do. He isn't bothered about the impossible. All he knows is that he wants to run and run faster than any horse he can lay his eyes on.

I think I know why he was dubbed as the American Legend. Because he raised hopes of millions of people. There comes a time in everyone's life when they doubt their abilities, their aspirations, their dreams and tend to lose themselves in that dark abyss. Your spirit seems to cripple beneath that burden. And at that point of time, all you want is one external spark to reignite the fire within. To get you out of that misery. To give you that ray of hope. To get you back into the race. To give you the courage that no matter how far behind you are in a race, there is always a chance to win it.

To Hope. To Freedom. And to the sound of hooves on the greenest of partures.
Posted by sirish aditya

Labels: mortals and others

Im outta words..it was so gud that..i could take my eyes off even 4 a while i got to da lst line..!! thnx to u mate 4 givng sch a mster piece..i found smethng dat can get me out of my worst of depressions.wen im in one..js by reading dis:)!!

rofl! babu vashi, antha etteyaku raa nayana..everytime i see your comments, vertigo sets in. but i really appreciate 'em. thanks.

im still stickin to my word that im ur bestest fan..!! u make me say this more strongly for evry new post of urs!!

love you bawa...atleast for ur posts! rofl!