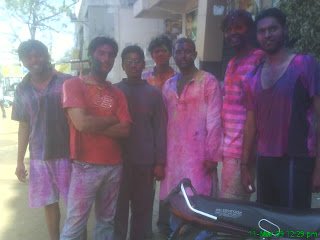 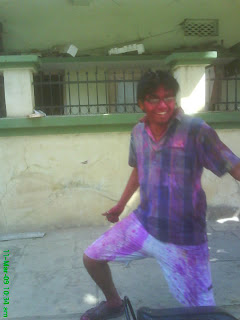 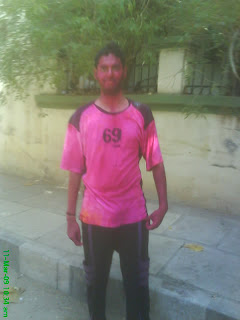 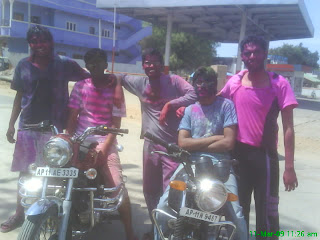 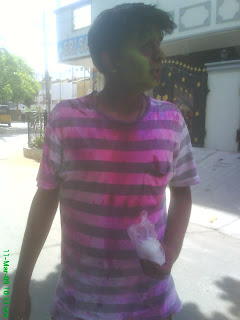 bboi! what fun... I started off playing with kunni and then santosh came down to my place... and after kunni helped herself on her second serving, after me, we set off to kishore's house where unkul was wearing a loose baggi tee with '69' printed on it ;)...

and then when we were driving back to my place, a bunch of guys stopped us and one guy brushed mah teeth with gulaal...eeks! once we returned to mah place, kunni helped herself with another scapegoat, drenching him with water. we waited for quite sometime, and then we hear the roaring sound of a bullet- raghav's here. we decide to prepare ourselves before her reaches us, but he's far too powerful for any of us and we are soon fighting for supremacy with aukath and vyvy.

now, we head off to shiva sharath's place who refuses to come down, flexing his muskles all the time and vikranth's dad shooes us away(i can't blame him, we were already lukin' like wild hogs). now to maddy and then off to jaipal. and we keep on running away from eggs all the time.

after a while, we start stinking o' eggs and time to meet ghattu. ghattu, nagarjuna and then sandy, shanky. after another helping of eggs, i head back home, barely recognizable and unbearably stinky.