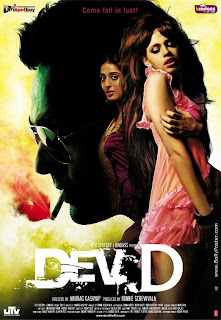 Poetic. The first word that came onto my mind as the end credits rolled out. And, only a film as powerful could have brought me back to writing reviews. The story of this egotistic, self-conceited, drunkard loser is portrayed with such adept finesse that even you would want to become a Dev D just for the heck of it.

I thought Anurag Kashyap couldn't get better than Black Friday(not having watched No Smoking) but he takes the ART of cinema to another level. And though his protagonist is a loser, the film is a true winner. Everything about the film, from the use of songs for narration, from the backdrop of break-dancers to let out the emotions of the characters to the not-pitiable portrayal of prostitutes is novel. And all of the cast and crew should be lauded because of their passion for the Art of Cinema.

Anyways, now to the plot. Actually, there's not much of a plot. Dev D is the modern, upto a certain extent its a parody, urban representation of the wannabe loser's idol, Devdas. There was a Devdas, Paro and Chandra. There is a Dev D, Paro and Chanda. And though all of them share the same backdrop, there's a difference of galaxies in their attitudes. Devdas portrays the emotions, attitudes and feelings of its protagonists of that time. Dev D does that for this age. Here, there's neither a pitiable, love-lost Devdas, a weeping, faithful Paro nor a forced prostitute in Chandra. There is a psychotic, sorry-for-himself Dev, a Paro who's "moved-on" and a prostitute by choice, Chanda because she is vengeful of this hypocritic world. You could actually say, Dev D is fiction weaved into fact because of the use of many actual scandals to build the characters.

Mahi Gill stands upto the short role of Paro and though not disarmingly beautiful, she's got a knack for acting. Kalki Koechlin is a revelation as Chanda and she portrays the role with such soft firmness that she can possibly be regarded alongside other prostitute protagonists such as Madhuri Dixit and Rani Mukherji. And, that's a tough task. The vehemence she puts into her voice when she talks about the world who called her a slut is enchanting. But, the real scene-stealer is Dev himself. Abhay Deol lives in the role of Dev and plays it with such elan that you would want to live the role of Dev knowing his character well. I don't think anyone from Dilip Kumar to Shar Rukh Khan have aroused such feelings in their viewers. Probably they evoked pity but the last thing you would want to feel about Dev would be pity. Sexy, stylish, graceful and utterly dazed in the effect of 'nasha', Deol is a winner. Especially those scenes where he knows he is a loser but doesn't want to admit it bring the best out of Deol and anyone would stand to tough competition to win the Best actor award this year.

Now, to the crew. The lines are minimal but brilliant, the art direction is splendid and bold, the cinematography is sleek and the editiing, cut. Amit Trivedi is bound to land in many a offer after this film. The lot-so-many songs composed fit into the film perfectly as a jigsaw and its a fine blend of new-age, urban music and Punjabi.

Watch it for the art of it. Unless you really love this medium called cinema, it is going to be a long, dreary walk for you. Kudos to Anurag Kashyap for making this and to Ronnie Screwwala for being courageous enough to experiment. Dev D is new, novel, bold and arty.

It'll either drain you or dazzle you.
Posted by sirish aditya