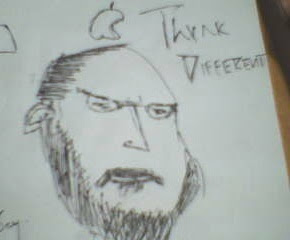 I first came across the name Steve Jobs last year, when I was reading a forwarded mail of his famous "2005 Stanford Commencement Speech" and lola!, I was struck by it. I didn't realise at that point of time that this man would change my life, I mean, literally. Every word of that commencement speech touched me and I realised this man was someone I wanted to be. So, back to Wikipedia and more research on the guy.

As they say, Charisma is a gift. But what if all you have in your life is loads of courage and oodles of charisma. Then you'd be Steve Jobs and someone I worship ;). Adopted by ungraduate parents, Steve went to college at the age of 17. But when he realized that formal education would lead him nowhere, he dropped out of college and took up only those courses which interested him. Now, tell me how much courage does it take for a middle-class boy of 17 to drop out of the conventional way and trust his guts? How many people in his place would have done it?

He was attracted by his neighbour, a Zen master, and attended his classes. He realized that there was some higher truth than everyone saw. So, he came to India in search of Spiritual Wisdom. But alas!, he couldn't find a teacher who could answer all his questions and returned to the US. And we must thank our gods because had he found himself a spiritual teacher, he never would've returned to the US and the computer would still be a device only for the scholarly elite.

At the age of 19, he started a business with his friend, a brilliant computer geek called Steve Wozniak. When he couldn't come up with a good name for the company, he called it his favourite fruit, "Apple". Woz was the mastermind behind the Apple I and Apple II but Steve was the one who took it to people. He was such a brilliant marketer and a businessman with great taste that within four years, Apple was transformed from an office of two in Jobs' garage to a 4,000 employee, billion dollar company.

Jobs became the overnight idol for the new generation of Americans. He was so captivating an orator that he could keep the audience spellbound even on his impromptu speeches. Jobs is a perfectionist and it shows in everything that he's created. From implementing GUI to Mac, to the look of the NeXT Cube and to the extraordinary simplicity of the iPod, his creativity shows. And the best part was, Steve was never a programmer. He could never understand the working of a computer. And that gave him a disregard for the impossible. He gave his engineers impossible designs and specifications and motivated them so much that they believed that they could do it.

He was probably rude, crazy and extremely short-tempered but all those people who knew him loved him because he was so charismatic. He could convince people into anything he wanted to. One of the most famous lines of business history, "Will you sell sugared water all your life or come with me and change the world?", was uttered by Steve to lure Paul Schulley, the then CEO of PepsiCo.

Even after he was chucked out of his own company, Steve still came back hard and gave successes to the almost bankrupt company Pixar, and started NeXT. But, as he himself admits, all that he got from life is well justified. Probably we don't realise it then but later, at one point of time, we do realise that What You Do is What You Get. After he was fired, he became a more stable man. He realised his limits, gave more time for himself and his friends and grew within himself. And now, Pixar sets the landmark for animation films throughout the World and NeXT is the core of Apple, which thanks to Steve, is now the biggest second act story of any company.

Steve has redefined the way people live their lives. They say, Ignorance is Bliss. Its very true in the case of Steve. Just because he was uneducated enough not to know what impossible was, he pushed people hard for getting it. Four of his milestones, the Apple II(the first largely marketed PC), the Macintosh(the first computer to successfully utilise GUI), Pixar(which proved to the people that animation wasn't just a tiny part of the movies, it could be used to make movies and show the impossible) and the iPod(which changed the way people commute and treat music), have changed the way we live.

And what's more, his famous rivalry with Bill Gates is scaling new heights and this man is still on. We don't know what he is going to come up with next. He doesn't know it either. But whatever maybe it, I can promise you that it will make a huge mark on the way people live. That's just of part of Steve for you folks. No one can ever come up with everything about Steve.

After all, he's the iGod.

For anyone who is interested to know more about Steve, check out this site. It is one of the most resourceful links available about Steve on the net.

sirish............the article is really fantastic............and u changed my impression on steve jobs again..as u know my comment on the picture na so....no comment on the pic ......shall we too drop from the college and start a company:-P....... no need to mention he is the igod and let us wait for some more products from such a geni=D> and ur writing skill is xcellent ........gud work buddy and carry on ..wid more intresting articles

it shows how much you are touched and inquisitive about Steve Jobs from the article you had read..

definitely, the tag ' what goes around comes back around ' is geniunely true...

The part that steve doesn know anything about computers is rubbish...He was the guy who predicted that pple could carry music,movies and even huge files in their pockets...he did that at 1986...jus around the time when John fired him...anyways..he was living and still lives way ahead of his time...cheers mate..:0

look mate akil! i cudn't view ur profile, so im replying in my own blog...jobs was relatively uneducated when compared to the geeks surrounding him...ppl like woz,bill and paul allen...obbly, for him to reign the industry, he had known smthing abt computers..but he wasn't a goddamn genius..and waiting for ur reply ;)