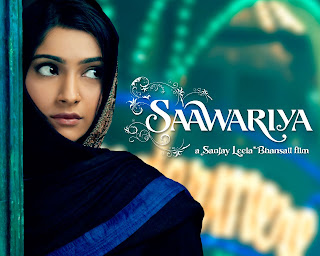 Saawariya is a beautiful tale told in an unconventional manner. It is a simple love story set in the midst of a neverland in time undefined. The director tries to answer the philosophy "Is a moment of love sufficient to keep a person content for the rest of his life?".
The best part of Saawariya is its cinematography and 5 stars to Ravi K.Chandran for that visual treat. The cinematographer puts the director's vision on the celluloid in an awesome manner.The two protagonists give a fresh look to the film and make a mark on their debut. Sonam Kapoor,as Sakina, is elegant as the woman torn between the past and the present but Ranbir Kapoor,as Ranvir Raj, is the clear winner between the two. He plays his character, of a happy-go-lucky young man, beautifully and his puppy-dog eyes convey the inner depth in his character which words fail to. He surely has a long way to go. The art direction is good and the sets transfer you from your seats to the centre of the drama.

But the film fails because of its extremely lousy screenplay. Though the film is barely 140 minutes long, it feels like an eternity when you finally walk out of the theatre. And when you get out of it eventually, there is that sense of incompleteness attached to the film which leaves you unsatisfied. The director tries to create a masterpiece but he meanwhile forgets the basics of film-making. The film, spare a few scenes, is not intriguing and rather than getting the viewer into the story, just skims past. Its got a very inhuman touch to it and fails to touch your heart most of the time.

The music is very fresh and fits into the movie perfectly,all credit to Monty Sharma for those lovely 11 tracks. They are inbibed into the film and prove that music touches the heart more than anything else.But the star of the film is, surprisingly, Rani Mukherjee who lives in the role of a woman forced into prostitution. Rani carries the role with her deft touch, firm but soft, and her extremely expressive eyes show the hidden layers beneath her smiling,attractive face she has for the world. Salman Khan has a very tiny role and he plays it well and Zohra Sehgal as lillipop is splendid.

Sanjay Leela Bhansali tries to rope-walk with this venture but fails. He, in search of stars, forgets the basics of film-making, that is, the flow of the tale. Bhansali could not pull of a winner but his failure is more graceful than the success of many other directors.