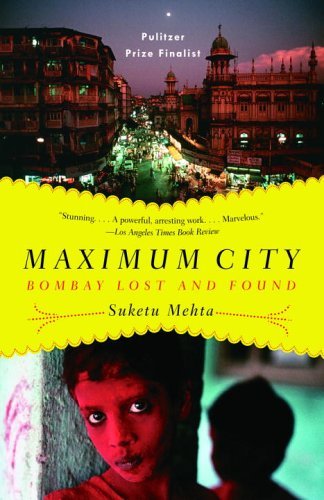 I have always been lucky. More often than not, I've come across books which have left me spellbound, awed and expanded. Suketu Mehta's Maximum City: Bombay lost and found is a book that has done all that but beyond everything else, it's a book that paces with a furious energy, at a bristling pace, tugging you into the local trains with it, involving you in gang wars, drowning you into the din of films and the colour of the night clubs and in the end, like it is making up for all of this, it has you meet a jain monk who contemplates and questions such a busy life.

I have no idea how long it took Suketu Mehta to research his material for the book but from what I can comprehend from the size of his canvas, he's left nothing that has ever been Bombay. This is gritty non-fiction writing, paced like a thriller, as unbelievable as myth and astounding as a story. It is one of those very rare books you can't wait to finish while dreading the fact that you might finish it too soon. I have always been an ardent non-fiction reader; The diversity of the world out there beats the greatest of imaginations. Its not just the writing that stands out, not the scope, and definitely not the research. All that is definitely great, but its been done before. What bowled me over completely was the approach, the intimacy with the city where Bombay ceases being just a place, or its people, or its food and culture but transforms itself into an organism, a living entity which forms a symbiotic relationship with everyone of its residents.

Mehta talks to everybody you ever thought of when you thought of Bombay; the encounter specialists, the gang lords, Bal Thackeray, the immigrants, the footpath dwellers, club dancers, film stars and all those anonymous individuals who can be identified only in a mob as local train commuters, slum dwellers, vadapav eaters or bomb blast victims. It reminded me sometimes of Gregory David Robert's Shantaram and William Dalrymple's Nine lives, but then it's on a different plane by itself. Mehta waits for his narrators and then pursues them with relentless zeal. He's ready to travel to the stinkiest of slums, to the farthest corners of the city, to the illegally run nightclubs and interview shooters jeopardizing his life.

Meeting all those colourful characters is every writer's dream and Mehta admits his delight. These people are the heroes of everyday-ness, who are all the same in their motivations and ambitions but differ in their methods and moral obligations. Everybody who comes to Bombay is either overtly ambitious or foolish enough to follow his dreams. Those ambitions and dreams range from buying a pucca house, to going to the US, to save money for the children's education, to fight a religious war, to become the country's next superstar, or to see the city clean of pollution and poverty. In a city which is a juxtaposition of all those dreams and dreamers trying to stay afloat, it could well prove to be the greatest spectacle of human beings as a society where We always comes before I and where to live is to live together.

By choosing a topic which is enchanting and intriguing as Bombay, half of Mehta's job was done. With the other half, he's done more than enough justice. In his quest to find his Bombay, he shows us our Bombay. Maximum City is not half much a narration as a journey. He never tells us anything. All he does is wake up every morning and take us along with him in local trains, on dirty pavements, through the slums and skyscrapers, from discussions in air-conditioned rooms to meals in one roomed sheds in his quest to find the soul of Bombay.
Posted by sirish aditya