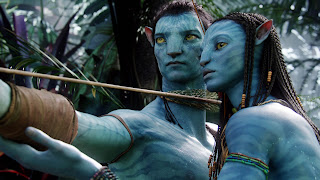 The finest cinematic experience I've ever had. I'd been dying to watch Avatar since the day I saw the trailer, convincing myself not to watch it on PC but on a 3D screen and I did watch Avatar 3D on the IMAX screen yesterday. Roger Ebert said Cameron definitely knew how to spend $300 million on a movie. I do not know about the money but what a way to spend 15 years of life making something so epic. Before I go down into the details of the film, there is something I have to do. Stand up and bow down to the human mind, to Cameron's mind.

Avatar couldn't have been more conventional in its storyline. There is a Hero, a Heroine, a Villain, a David, a Goliath and the Hero who realises what's right just before its too late. Oh! the same old story. Yes it is but it never tasted this good. I do not want to unfold the story here, now. That is not what I'm here to do. I'm here to tell you why you should or should not watch a film. And trust me folks, Avatar is nothing like you've ever seen before. Everything would seem so real that you'd be as scared as the characters in the film, as awed as them and you will experience the movie as a part of it. Sound great? Well, its actually better than that.

Cameron did the right thing by waiting for the technology to develop. If the film(about 70% of which is CGI) hadn't been so real, we might never have believed it. What really left me awed was the detail in the film. True, an entire new world was to be created and that needed a lot of thinking but every animal, every plant, every native was made with so much attention to it that it was almost as diverse as our own planet. All those kinds of animals resembled a lot of our own but then, shouldn't they? Pandora from a distance is like Earth but when you notice, there's quite a lot of change. Infact, the entire flora and fauna are is charmingly Fluorescent. And the natives. The Na'vi are stunning. The cat-like, humanoid, blue-coloured people with tails have been so painstakingly detailed that they seem more human than humans themselves(wait a sec, is that an oxymoron?!).

As for the performances, there's not a lot for the actors to do but all of them have done a good job. Infact, Neytiri is someone I will never forget. Zoe Saldana comes up with a performance so memorable that she'll be remembered as Neytiri for a long time. This is an out and out Cameron's film. One man's pursuit to show the world what a human mind is capable of.

Before I started this piece, I wanted to write a long post. But now I can't write more than this. Because Avatar is not a movie. It is a state of mind. It is not a story. Its a journey. A journey so enchanting, so powerful that you will never forget it.
Posted by sirish aditya