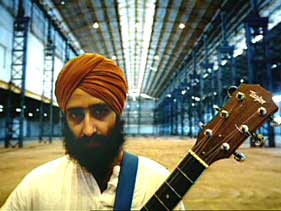 A young Sikh in white Kurta, strumming the guitar and singing about his existence in streets. If you've seen Bulla Ki Jaana, you'd know what I'm talking about. And if you haven't heard Bulla Ki Jaana yet, where have you been all along? Until I heard it, I never knew music had such an influence on people. I envy those moments I first saw the video. The feeling pervading in my stomach all that day is inexpressible.

I couldn't stop listening to it, and it alone for about a month or so. Ajj Nachna, Jugni, Ishtiharr, Gill Te Guitar, infact every song is a masterpiece. No fill-ins. I listened, I listened and I listened some more. But the worst part was, I couldn't comprehend the lyrics and so I started reading the translations. And then I realised the diversity of the album , not just in its music but also in its subject. Rabbi, the album, has everything in it-right from a Punjabi story of two parrots in love in Totia Manmotia to the story of his friends and old days in a Summer of '69 like Gill Te Guitar and from the state of the country in Jugni to seeking answers for his existence in Bulla ki Jaana.

After you've listened to Bulla ki jaana, everything else pales infront of it. The song with its utter simplicity and Rabbi's enchanting voice is so haunting that you can't stop humming it. But the other songs are far above the par, especially for a Punjabi album which came in just after the Balle Balle-Daler Mehendi era.

Last year, saw the entry of one of the most anticipated albums, Avengi jaa nahin. After more than a 4 year long hiatus, Rabbi comes back with an almost almost as good as the first one. The first album is nearly perfect and reaching close to it is no mean task. And in AJN, the spectrum is narrowed down. Both musically and subject wise. There are songs about Gujarat riots, Female feticide, Bandra and description of a long lost lover. The songs are more layered now, Rabbi's voice variations more complex and lyrics, for me, as usual incomprehensible. So, I get back to the translation and find that this time the songs aren't that great. Infact, Return to unity has pretty juvenile lyrics. But I really fell in love with Bilqis, Challa and Return to unity. Especially those parts in Bilqis when he says Unnees nineteen times and that underlying Jana Gana Mana music. Brilliant.

Its hard to believe Rabbi's an untrained musician. The kind of music he composes is much better than that of many trained musicians. Rabbi's music cannot be categorised into a single genre, his lyrics are in Punjabi and he looks more like saint than a singer. Infact, the story of his journey is as unconventional as his songs. His actual name's Gurpreet Singh Shergill but he renamed himself as Rabbi(Rab means God, Rabbi meaning God facing).Idolises Bruce Springsteen and Led Zepp. And he's happy composing music as and when he likes to.

And the best part is, he's proud of his Indian roots. He isn't one of those innumerable singers who sing in fake accented voices and copy tunes of Ricky Martin and Je Lo. He, infact has a huge cult base of fans, I luckily among them, who are happy to wait for his next album, meanwhile treating themselves to his previous work and thanking Bulle Shah for writing that poem which prompted him to re-invent Bulla ki jaana, Rabbi style.
Posted by sirish aditya