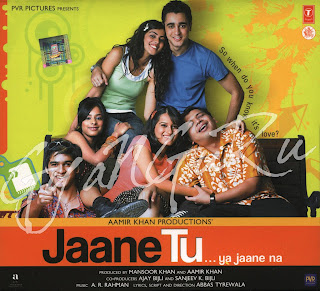 Aamir Khan's nephew's launch couldn't have been more unexpected. For someone who is known for making all out-of-the-box films and is named the maverick of Bollywood, he stuck to the basic rules of Bollywood for his second film as a producer, a love story of two best friends who until the last scene don't realise that they love each other. Sounds familiar? Sure is.

Jai(Imran Khan) and Aditi(Genilia) are inseperables. They have been the best friends for the past five years, since the first day of their college. But they are just best friends. Period. And they are a part of this gang of 3 'Guys' nad 3 'Gals', who are just the big perfect Dosti-key-vaasthey-kuch-bhi-karega people. And then when Jai and Aditi pass out of college, everyone expects them to end up married, everyone except them. They laugh at each other at the prospect of marrying each other and tell everyone that they are not in love, only to end up getting married at the end of the movie, to anyone's guess.

After Abbas Tyrewala's scripts of MunnaBhai MBBS, Maqbool and Darna Mana Hain, Jaane Tu is a let down from him. Its a typical Bollywood commercial script but narrated in a warm-touching manner. And that is the only reason, you should watch Jaane Tu Ya Jaane Na. No thrills, no frills, no action sequences and no masala songs. Its just a simple love story and partly defining relationships. Abbas tries to put in a lot of things into his film and that over-crowds the film. Had he been more specific with what he wanted to do, the movie probably might have been brilliant.

But credit should not be taken away from the film for what it is. Some sequences are just brilliant, like the one where Jai goes to have dinner with his girlfriend's parents or when he looks at Aditi when someone calls someone else beautiful. AR Rahman's music is marvelous as usual. How can the great man come up with better music every film and take the notch up a little higher so that others can never reach it. Kabhi Kabhi Aditi, Nazrein Milana and Pappu can't dance add to the flavour of the movie and make the simple characters even more lovable.

The cast looks far too amateurish for their 20-something roles. Everyone looks like a kid and it rather looks unappealing when they romance. Imran Khan fits into the bill perfectly. He's a good actor and is really camera friendly and you attach to him from the first scene. He can look forward to emulate his uncle. Genelia is a scene-stealer. She's sweet, awesome and gorgeous as Aditi. And she puts up a great performance as well. If for no other reason, you have to watch the film for her. Other notable characters include Paresh Rawal and Naseeruddin Shah who provide the required humour.

Tyrewala's debut film as a director maybe a failure in some aspects but it is a simple, sweet, warm film with characters with whom you can connect to. Once you come out of the film, you'll feel good about something and you wouldn't know what that is. And that is why Jaane Tu is a winner. Its such a feel good film that you want to re-live the experience again. But watch it with no inhibitions and no expectations, and you'll love it, trust me.
Posted by sirish aditya