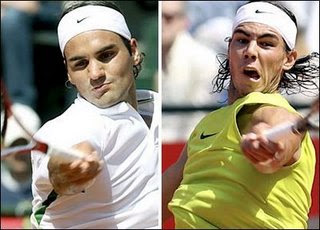 Can an athlete of the super-natural prowess be over-powered by another, in a rare, exhilirating display of genius, nothing like the world has ever seen? Well, that happened on the 6th of july, when the world witnessed the collapse of arguably the world's greatest tennis player to his second best-and that too in his own backyard.
Roger Federer played second best to Rafael Nadal, who has been stalking the great man since the moment the latter won his first Rolland Garros title. Unsatisfied by his "second best" title, he stuck to his childhood dream of being "the best" tennis player. He was mocked by people when he said he wanted to be the best of his generation, because he had to beat the Swiss maestro, arguably the most gifted tennis-player of all time, to be the best. But Rafa wasn't deterred by whatever people said and now, a little over 3 years after he clinched his first French Open title, that isn't just possible but now seems inevitable.

So, what exactly happened to the Pied Piper of Tennis rankings on the big night? Well, to put it simply, he was overwhelmed by the Spanish Workhorse. Federer, a guy who could still be found calm in a blizzard, was visibly very nervous before the match. You can't blame him either. Nadal as been getting onto his nerves since he defeated Federer in the semi-finals of the French Open 2005. Federer was broken by Nadal in the 3th game of the first set and it cost Federer almost 20 games before he was anywhere close to his class. He fought from the brink and managed to win the 3rd set. But then it took the best out of him to fight Nadal's championship points in the 4th set and take the match to the deciding final set. His backhand to the baseline to win the 4th set was a true mark of a genius, which can never be imitated by mere mortals like Nadal. But sheer physical and mental strength was required to win the deciding final set in the tie-breakers and the already drained Federer could not pass the ball over the net to save the match. A second later Nadal was on the grass, exhausted but dazed with what he had done.

Federer and Nadal are two extremely contrasting creatures, in all respects. The Spanish is burly, muscular, aggressive and intimidating. The Swiss on the other hand is gentle, simple and doesn't look one bit like a true athlete. Rafa looks like the lead Guitarist in a rock band with his sleeve-lees tees, pirate pants and sharp features. Roger looks like a gentle English farmer who usually features in Dickens and Maugham. Similarly, their playing styles are contrasting too. For Nadal winning is the only way of playing. Winning gives him his worth. It measures his own strength for him to prove himself. And so he pushes his body to his limits to win. For Federer, playing is joy. Its a way for him, as Paulo Coelho would've put it, to find himself. And he enjoys every moment of his play, whether he wins or losses. And probably he lost because he wanted just to win, beacuse he wanted to prove the world his mettle after his successive losses to Nadal. He didn't seem to enjoy being there as he always was, but whenever he was being himself, we got a view of his genius. Some volleys and forehands were far too magical for anyone to think and act. Because he was pressurizing himself to win, he couldn't enjoy his play and he missed those backhands which he could've played with his eyes closed, any other day.

For the millions of viewers across the globe, it was a spectacle. A true once-in-a-lifetime opportunity. It is not everyday that you see a sport cross levels and become almost super-natural. If people thought the players could not outdo each other any better than this, they were proved wrong soon. If Nadal was very modest in the Presentation ceremony, citing that Federer was the No.1 , Federer was equally gracious. He said the spaniard deserved to win that day but forewarned him that he would be back the next year. And, for someone of Federer's calibre and class, it is a high probability that he would be back with vengeance the next year.

The match was more like a scripted drama with all the elements brilliantly provided, with the rain coming down at the right times, Nadal missing out 3 championship points in the 4th set and Federer showing signs of being back to his form. It was probably the match of the new millenium-and was truly The Clash of the Titans.
Posted by sirish aditya

Nice article, but it seemed to be completely about federer but not about the marvellous play by NADAL and also the spirit of the game.
But the review is simply superb buddy.